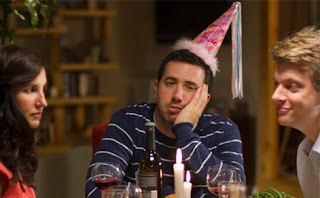 Missed Connections is a really refreshing romantic comedy, and was definitely one of my favorites of the festival.  Neal has just discovered his girlfriend screwing his best friend, and has quit his job to boot.  His buddies come up with a plan to cheer Neal up and get him laid: Respond to Craiglist "missed connection" ads, arrange to meet up, wait for the girl to give up on waiting for the guy who never shows up, and then swoop in and make his move.  The plan works like a charm....until the same woman starts showing up at all of his meeting places.

Missed Connections had smart writing, good dialogue, and good acting by a group of real-life friends, including real-life husband and wife playing the male and female leads (aww!).  In a Q&A following the film, we learned that the whole thing was made in 19 days and for $25,000, which is incredible given how good it was.  All in all, a charming yet decidedly un-cheesy romantic comedy from a bunch of new faces who I hope we'll get to see more of.  8.5 out of 10.
Posted by abbalish at 2:35 PM