Seeing Shame at the movie theater, we got carded not once, not twice, but THREE times - buying the tickets, giving the tickets to the ticket-taker, and going into the theater.  There were two older women in front of us, and they thought they were being carded because they'd bought senior tickets and needed to prove their age.  The ticket-taker laughed and said, "No, it's SUPER NC-17."  Not gonna lie, at this point I was pretty excited to see what we were getting ourselves into.

Leaving the theater, my initial response was that I didn't really like Shame.  I couldn't really put my finger on it but I guess I was kind of left wondering what was the point?  There's no real personal growth of any kind.  We leave Brandon much the same as when we first met him.  After sleeping on it I decided liked Shame a bit more than my initial response, and I was able to figure out what had bugged me.  I was bothered because I didn't feel like we got to know Brandon at all.  There was some hinting of Brandon's and Sissy's painful past but it was never really delved into or explained.  I would have liked to have learned more about their past to learn why they are the way they are in the present.  Without knowing what they'd been through I didn't really find them sympathetic characters - I didn't really like them, nor was I able to relate to them.

But it's got to be worth something that I've been thinking about Shame for the past 24 hours, right?  If Brandon's and Sissy's pasts were explored a bit more I think I would have like Shame a lot better.  But apart from not knowing what made them tick, I don't really have any other major complaints about the film.  6.5/10.

Le Havre is a Finnish film directed by Aki Kaurismaki, who my husband loves but I'd never heard of....which, come to think of it, is pretty common in our household.

If you should ever find yourself at the Gateway Theater in Columbus, Ohio, and you find out the movie you're seeing is in Theater #8, beware.  This theater sucked!  It was tiny, without raised seating.  The seats were basically the kind of "theater seating" you'd buy at a furniture store, except they didn't recline.  And since you're sitting on floor level, you have to look up in order to see the screen, which is hard to do when you can't recline much.  Not very comfortable, indeed!

Le Havre centers around Marcel Marx, an aging gentleman who scrapes by working as a shoe shiner in the French city of Le Havre.  He spends his days shining shoes with his coworker Chang, grabbing baguettes and vegetables from the local shops "on credit" on his way home, and then perhaps capping off the day with an aperitif or two at the local bistro, while his wife Arletty prepares dinner.

Arletty falls ill and is hospitalized at the same time that, by happenstance, a young African refugee named Idrissa enters into Marcel's life.  Marcel takes the boy in and vows to help him escape to London to find his mother.  Marcel's small community rallies around him - the shop owners who merely tolerated Marcel previously step up by donating food, hiding the boy, and organizing a "trendy charity concert" to raise the funds it will take for Idrissa to escape.  Meanwhile, Marcel and those around him are relentlessly pursued by a local detective, who is searching for Idrissa, presumably to deport him.

I don't want to say too much, lest I give away any spoilers, but ultimately, Le Havre ends up on an uplifting note, although I had the feeling of waiting for the other shoe to drop the whole time I was watching it.  To me, it had kind of a grim tone, but it could have also just seemed that way because I didn't really know what to expect.  According to my husband, Le Havre wasn't as funny as the other Kaurismaki films he's seen, although I thought it did have a few funny moments.

Immediately upon exiting the theater, I think I would have given Le Havre a 7.5 or 8 out of 10.  Some movies get better in my memory as time goes on (Drive is a recent example that comes to mind), but for whatever reason, Le Havre is not one of these movies.  I mostly enjoyed watching it at the time, but now I'd go with a 6.5.  I guess it just didn't have any impact that stuck with me.
Posted by abbalish at 7:47 AM No comments: 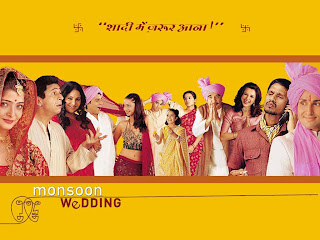 Saw this little gem on my husband's "to be watched" pile last night, and I remembered the name from several years back but I had never seen it, so we decided to give it a go.

I really liked this movie.  Monsoon Wedding is the story of a young Indian girl, Aditi, who is about to enter into an arranged marriage with a young Indian gentleman who lives in the United States; the film takes place during monsoon season in the days leading up to her wedding- a lavish, colorful affair that her father really cannot afford.  It's a mostly lighthearted story with some serious subplots - Aditi is not quite over her affair with a married man, while her cousin must face the uncle who abused her when she was young, and her younger brother struggles with needing his father's approval of his love of dance and desire to be a chef.  Ultimately, things fall into place in time for the wedding.

The family drama plays out against the backdrop of beautiful colors and music, and yes, some monsoons.  I'm never one to turn up my nose at an extended dance scene, and Monsoon Wedding definitely didn't disappoint in that respect!  It also made me want to re-do my wedding as an Indian affair.  All in all, this was a really enjoyable film.  It was a nice story with likable characters set against a pleasing sound and color palette.  9/10.

Note, 1/21/12: I am downgrading my initial rating to an 8.5/10.  I am typically quite sparing with very high ratings.  I still really enjoyed Monsoon Wedding but 9 just seems a hair too high upon further reflection.
Posted by abbalish at 2:14 PM No comments:

Wow, it's only January 5 and already I've been slacking on my movie reviews.  I watched this movie 3 days ago and I almost forgot to write about it!  Oh well, I'm writing about it now.  Phew!

We were flipping through the movies available on our Roku box (don't ask me what that is because I don't really understand how it works), and my husband pointed out Cold Weather, and told me it was a "mumblecore murder mystery."  My interest was piqued.  I am not sure what the definition of "mumblecore" is but it's a genre of movie that I tend to like.  According to Wikipedia, "Mumblecore films are generally set in a post-college milieu, with characters that are typically heterosexual, white, middle class, and in their twenties.  These films are typically character-driven, focusing more on relationships than conventional plot points." That sounds about right.  My two favorite mumblecore movies were Funny Ha Ha and Mutual Appreciation, which were some of the first movies in the genre.  Since then, I have been sorely disappointed by most of the other mumblecore movies that I've seen, even though I always forget that and get excited when a new mumblecore film enters my radar.  I frequently have the complaint that nothing much seems to happen, and the movies also tend to cut off rather abruptly at the end.  But those two are really good, trust me!

But I digress.  Cold Weather.  Spoiler alert!  This was the story of a dude who had gone to school for forensics science and likes to read Sherlock Holmes (you hear me?  That is an important plot point that the movie points out at least six times) but has dropped out of school and is now living with his sister in Portland and working overnights at an ice factory.  His ex-girlfriend comes into town and he hangs out with her and his buddy from work a few times.  Cue the disappearance of the ex-girlfriend, and then the dude and his buddy put their investigative skills to work and try to find her.

Ho hum.  Like so many mumblecore movies I've seen before, this one disappointed.  This one had a little more action and plot than most, but it was guilty of the abrupt ending, which always irks me.  It wasn't completely terrible but I didn't really like or care about any of the characters and found Cold Weather ultimately forgettable.   I'm feeling generous, so I'll give it a 5/10.  See you when I watch my next movie!

Posted by abbalish at 9:39 AM No comments:

Technically, I saw this movie yesterday so it was still 2011, but what the heck, I'm using it for my inaugural 2012 movie review.

Somehow, I made it to the ripe old age of 30 without seeing a single Mission: Impossible film.   But that all changed yesterday!  In general, action movies don't hold much appeal for me - actually, that's not really true.  I always *think* that I don't like action movies but I generally enjoy them if I bite the bullet and actually watch one.  Which was exactly the case here.  I found yesterday's movie enjoyable to watch, even though a lot of the high-tech stuff went over my head and I didn't really understand what they were going to be doing until I actually watched them do it.  It was a fun, exciting story that kept me interested throughout the over two-hour run time, with decent acting and lots of tense moments that made me gasp.  All in all, I give it a 7.5 out of 10.

NOTE: there is no science or true criteria behind my 10-point scale; I rate merely based on emotions, which is, I guess, why I am not a professional film critic.  Also, I'm hoping my film analysis skills improve throughout the year.

Cheers, and happy new year!
Posted by abbalish at 8:13 AM No comments: