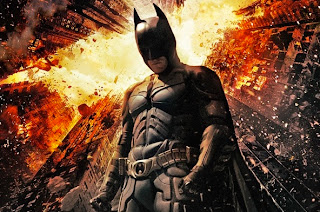 Not entirely surprisingly, I didn't love The Dark Knight Rises.  Really, I just think this kind of movie isn't for me.  Sorry, America.  I haven't seen Batman Begins and I hardly remember The Dark Knight.  In general, I just don't have a great track record with comic- or superhero-based movies.  So let's just chalk this up to me not being the intended audience.

I feel like everyone knows this already, but TDKR follows Bruce Wayne as he emerges from his reclusive existence of the past eight years to save the city of Gotham from the underground terrorist villain Bane and his henchmen.

I did stay mostly interested during the two hour and 45-minute runtime, and I thought there were some very cool visual effects.  Although, I found it too loud at times and with far too much gun violence.  I found Bane difficult to understand.  I also had a hard time keeping all the bad guys straight.  Like I said, this is an issue with me and not with the movie.  I think knowing the origins would have helped but I probably wouldn't have wanted to watch the earlier movies.

I'd read this book, by Russell Banks, a couple of years ago, and pretty much forgotten about it until I read the description on the back of this DVD and thought it sounded familiar.  The Sweet Hereafter explores the aftereffects of a tragic schoolbus accident on a small Canadian town.  The film focuses on several of the affected families before and after the accident, as well as the professional and personal struggles of the lawyer who comes to town to file suit against the bus company.

It was very good.  The whole movie had a bleak feel to it, with lots of snow and ice and gray skies throughout.  The families' grief felt very believable.  There were really no unlikeable characters; no one was perfect, but everyone coped the best they know how - including the lawyer himself.  I found the bus driver's story especially touching.  A sweet woman, she loved the kids she drove to school every day and kept talking about them in the present tense even after they were gone.

To Rome With Love This is going to be a quickie because it was a week ago that I watched it, but it feels even longer ago, mostly because I've been in Las Vegas for the past 4 days.  To Rome With Love is Woody Allen's latest endeavor.  It focuses on several story lines taking place in the city of Rome - a young American architecture student and his blossoming relationship with his girlfriend's best friend; a young American woman and her French fiance (and her father's attempts to turn her fiance's father into an opera singer); a young Italian couple who suffer a series of mishaps and misunderstandings throughout the course of an afternoon; and a middle-aged Italian man who wakes up famous one day.

I just thought it was OK.  I thought there were too many story lines happening, with no intersection among them.  The story about the suddenly-famous middle-aged man could have been removed entirely.  And I found that it dragged on too long at the end - it could have ended probably 20 minutes earlier than it did, without really changing any of the stories' conclusions.  I wanted to like it because it's Woody Allen, but it was just too busy and too much.  5.5 out of 10.
Posted by abbalish at 3:24 PM No comments: 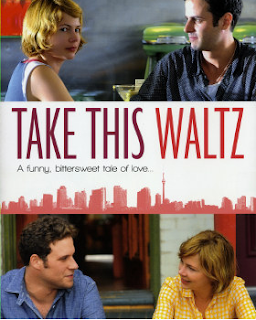 I thought I was really going to like this one.  I like Sarah Polley (the director), I like the title (it's a Leonard Cohen song), I like Michelle Williams and Seth Rogen, it's been getting good reviews from critics, and besides - look how cute that poster is!

Take This Waltz is about Margot (Williams), a 28-year old loosely employed freelance writer, who lives with her husband Lou (Rogen), a cookbook writer who writes solely about chicken.  Despite the fact that neither of them appears to work very hard or make much money, they live in a lovely home in Toronto.  On a flight one day, Margot meets Daniel, who happens to be her neighbor.  Daniel is a rickshaw driver and artist who doesn't display his work - don't even get me started on how HE can afford his house in the city.  Margot and Daniel fall in love.  But will the new love hold up?  Or will the new simply become old?

The thing about this movie is, I just found Margot so unlikeable that it killed the movie for me.  She baby-talks ("I WUV WU!").  She's needy and clingy.  She's neurotic, to the point where she needs a wheelchair in airports to make it to connecting flights.  She's bossy.  She pees in swimming pools.  She's a tease.  My husband and I were seriously wondering if she was mentally disabled.  I think we are supposed to find her neuroses adorable, but instead, I just wanted to smack her.

Maybe Take This Waltz would be a different movie if the central character were written differently, but as currently written, I found it unfathomable that not one, but two men were completely smitten by this awful woman.  4 out of 10 - although I will say it was kind of fun making fun of Margot while watching.  And I've been enjoying saying "I wuv wu" to my husband ever since.
Posted by abbalish at 5:27 AM No comments:

An early-ish film from Steven Soderbergh, The Limey is about a mysterious and dangerous British man travels to Los Angeles to avenge his daughter's death.  It was well-made, but just didn't really do it for me.  I didn't dislike it, exactly, but found it somewhat slow and a bit hard to get into - although it wasn't boring, either.  6 out of 10.
Posted by abbalish at 5:26 AM No comments:

A trio of magazine employees ﻿do a story on a guy who placed a Craigslist ad looking for a partner in time travel.  In working on the story, they all manage to grow as individuals.  And besides, this guy can't really travel through time.....can he?

Safety is a quirky romantic comedy of sorts, except I don't think the romantic aspects were all that important.  I guess, then, it's just a quirky comedy.  And a quiet one, funny in its own way.

I thought this was a different, cute movie, and very enjoyable to watch.  8 out of 10.
Posted by abbalish at 5:10 AM No comments:

I actually didn't know what Magic Mike was until a couple of days before I came out.  I had heard of the title, and for the life of me couldn't figure out why every girl I knew on Facebook was freaking out a bit.  In case you don't know, Magic Mike is NOT about a rapper.  To the contrary, it's about a struggling young man named Adam who befriends a male stripper (Channing Tatum) and is taken under his wing.

It was decent.  The first half was full of stripping and elaborate dances, and there were lots of laughs.  My husband claims there wasn't anything inherently funny about the stripping, but I'm sorry, show me a shirtless Matthew McConaughey in assless chaps, and I will laugh every single time.  Side note: do you know how hard it is to spell "McConaughey"?  I do now.

The second half of the movie, the tone seemed to change.  There were a few early references to the strip club's owner screwing the guys out of their fair share, and to drug use, but those two themes held center stage in the latter half of the movie, and everything felt a lot more serious.  I felt like they could have been built up more, but the way the movie played out, it seemed like they came out of nowhere.  Also, I felt like the clientele at the strip club were way too female and attractive, and the strippers were way too straight.

Overall, it was a fun movie with serious undertones that was not without its share of flaws.  Worth a watch if you're into assless chaps.  7 out of 10.
Posted by abbalish at 1:36 PM No comments:

Headhunters is a really smart Norwegian thriller.  Roger Brown is a man used to living above his means, who supplements his lifestyle by stealing art.  His gallery-owner wife introduces him to a man in possession of an extremely valuable piece of art, and Roger risks it all to get to it.

The plot doesn't sound all that interesting to me, and so Headhunters is one of those movies I wasn't all that pumped about seeing beforehand.  But, it was really, really good.  It was mysterious and suspenseful with good twists and turns.  I also appreciated that everything was explained pretty explicitly by the end of the film, but not in a dumbed-down way.  Headhunters was definitely the strongest of our weekend movie bonanza.  8.5 out of 10.
Posted by abbalish at 1:23 PM No comments: 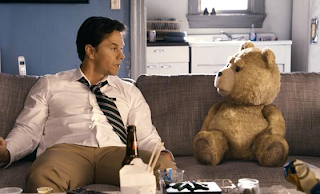 In case you somehow haven't heard of it, Ted is the story of a naughty living teddybear.  John, Ted's owner, is trying to move on with his life with his girlfriend, but Ted just keeps bringing him back down.

Ted was mostly enjoyable - sometimes funny, sometimes stupid, and chock-full of fart jokes (which happens to be a bonus in my mind).  Like so many comedies do, it struggled to keep up the funny pace of the first half of the movie, so it seemed to drag a bit in the second half.  Regardless, all in all, it's worth seeing if you're into dumb comedies.  6 out of 10.
Posted by abbalish at 12:55 PM No comments: