A Lonely Place to Die

British thriller about a group of mountain climbers who discover a young girl buried underground and take it upon themselves to rescue her - while being pursued by the girl's kidnappers.  Let's just say their rescue attempts don't go so well, and leave it at that.

I thought A Lonely Place to Die was a well-made thriller, and it kept me on the edge of my seat with lots of tension-filled scenes.  I sort of equate it with Eden Lake, which I watched a few months back - people doing things in the wilderness who get in over their heads.  And same as with Eden Lake, I am comforted by the fact that I am not an outdoorsy person, so the chances that I will discover a young girl buried underground whilst hiking on a mountain are pretty slim.  And if, by some chance, I should find myself in that situation, I now know that I should probably just leave there.  Just kidding.  Maybe.  8 out of 10.
Posted by abbalish at 7:10 AM No comments: 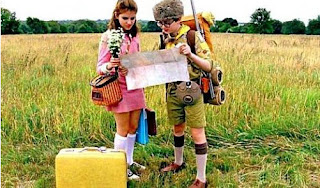 I have seen probably half of Wes Anderson's earlier movies (Rushmore, The Royal Tenenbaums, The Darjeeling Limited, Fantastic Mr. Fox).  Okay, maybe that's more like 2/3 - the only ones I appear to have missed were Bottle Rocket and The Life Aquatic with Steve Zissou.  Okay, now that I've given more details than anyone cares to know about my personal history with Wes Anderson films, I'll say that I bring up the fact that I've seen a number of his earlier films only to say that I'm actually not a *huge* fan of his work.  I have mildly enjoyed most of what I've seen (and I've probably enjoyed Darjeeling and Mr. Fox the most), but I seem to always have the general feeling that the movies are trying too hard to be quirky.

Moonrise Kingdom takes place in the summer of 1965 - 12-year old Sam and Suzy (and Suzy's kitten, in what was, in my opinion, a show-stealing role) run away together on a small New England island.  All the while, they're pursued by a motley search party of adults - Suzy's parents, Sam's camp counselor, and the police chief, who may or may not be having an affair with Suzy's mom.

I liked Moonrise Kingdom but I didn't love it.  I thought it was a cute, nice movie.  The 12-year old stars did a really good job and were fun to watch.  And while I felt it had some of the trademark Wes Anderson trying-too-hard quirkiness, it seemed to have less than his other movies.  And in all seriousness, bonus points for basically the third biggest part being an adorable kitten.  6.5 out of 10.
Posted by abbalish at 7:01 AM No comments: Definitely not a new movie at all (it's from 1991), but it was new to me!  We watched this on DVD last week, and I really enjoyed it.  Grand Canyon focuses on the intersecting lives of different individuals and their families in Los Angeles, beginning with the friendship that forms between a wealthy white lawyer and the black tow-truck driver who comes to his rescue when his car breaks down in a bad neighborhood.  The movie was touching and funny and sad all at the same time, and I didn't want it to end because I was enjoying it so much!  9 out of 10.
Posted by abbalish at 1:41 PM No comments: 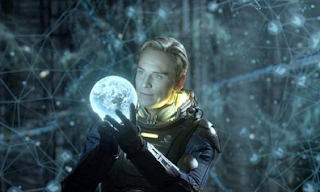 I had mixed feelings about Prometheus.  Also, I feel that I should mention that I have not seen any of the Alien movies, to which Prometheus is supposedly the "unofficial" prequel, but I don't think that matters.

The movie begins with a weird humanistic form eating some caviar-looking stuff, and pretty much exploding.  The next thing you know, it's 2089 and a spaceship full of scientists is about to land on an Earth-like planet, in theory to explore humanity's origins.

Prometheus kept me interested throughout the 2+ hour runtime, but I also thought it was kind of dumb.  And I thought it left too much unexplained - like, I *still* don't understand who the dude was in the beginning of the movie, and what his destruction had to do with anything.  So maybe the movie wasn't dumb, and I'm the dumb one.  Oh well.  6 out 10, because like I said, it kept me entertained.
Posted by abbalish at 1:31 PM No comments:

I don't know what my deal is lately, sorry!  Here's what I've seen lately:

It's been a few weeks and already the details are fading, but Bernie is the true story of a small-town Texas funeral director (Jack Black) who befriends a wealthy elderly widow (Shirley MacLaine)....and then goes to great lengths to conceal her death after he somewhat accidentally kills her in a rage.  Interesting story, and Jack Black was perfect as Bernie.  Bonus points for his earnest radio singalong in his car.  7 out of 10.

Exactly what I expected - fairly raunchy, large parts stupid, and small parts surprisingly insightful at times.  The ending monologue legitimately made me think about my own country's governance.   5 out of 10.

We Need To Talk About Kevin

Had this one on my radar for ages and I am glad I finally got to see it.  It stars Tilda Swinton as Eva, the mother of a troubled boy named Kevin, who basically loses it one day and shoots down a bunch of his classmates.  The film tells two stories simultaneously - that of Eva and Kevin's relationship starting from his birth, and that of Eva's coping with the many ramifications and repercussions of what her son did.  Really interesting and powerful movie which made me think a lot.  8.5 out of 10.