Here are my favorites of the year, in what I *think* is actually ranking order.  So click on the links below, and read!  Learn!  Enjoy the fruits of my year-long labor! 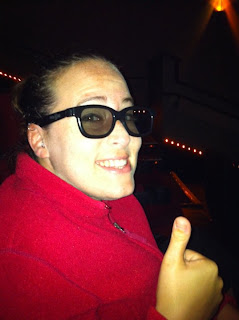 These rankings are all really close - these are all movies that I really enjoyed, and all were rated an 8.5 or a 9 out of 10 on my scale.  It's completely possible that if asked to pick/rank my 10 favorites tomorrow, I'd come up with a completely different list.  I reserve the right to re-do this list in the event that I see additional movies from 2012. Which brings me to my next note.....

I only included movies that were released in 2012.  There were several movies from prior to 2012 that would've made the cut, but I wanted to stick to new films for this list.

1. The Grey
2. Sleepwalk With Me
3. The Sessions
4. Headhunters
5. Compliance
6. Looper
7. Silver Linings Playbook
8. The Cabin in the Woods
9. Argo
10. Missed Connections

Well, friends and imaginary readers, we've come to the end of 2012 and thus ends my year-long project of movie reviews.  I bring you my final review for the year: Higher Ground, directed by and starring Vera Farmiga as Corinne Walker, a member of a fundamentalist Christian community who begins to question her own faith.  After becoming pregnant and marrying very young, Corinne and her husband embrace religion after a bus crash almost kills them and their infant daughter.  They enter the fold of a community that's not quite a cult, but is close.  Through the ensuing years, her faith begins to falter, and Corinne eventually must decide whether to stay a part of the community, or leave.  I thought Higher Ground was sort of a quiet little movie about one woman's struggle, but it was an interesting story with good actors.    7 out of 10.

It's been a fun year, albeit frustrating at times.  I'm not going to lie; I'm looking forward to a movie just being a movie, and not a writing assignment.  But I've enjoyed trying to think more critically about the films that I've watched.  Still to come - my best of 2012 list, to wrap up the year.  Happy 2013 :-)
Posted by abbalish at 4:48 PM No comments: