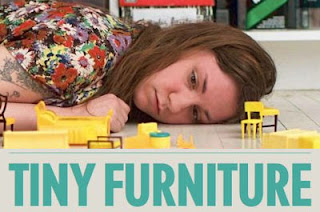 Our main DVR box has been misbehaving for quite some time now.  The good news is, we got a new box.  The bad news is, we'd lose all of the recordings we'd saved.  Let's just say I had a busy couple of days clearing old stuff off of there - I watched five episodes each of Intervention and Pan Am.  We'd had Tiny Furniture saved on there for months.  Last night, the hubs and I finally sat down to watch it, since we'd lose it if we didn't.  Neither of us had particularly high hopes, knowing that this movie fell loosely into the mumblecore genre, but we were both pleasantly surprised.

Tiny Furniture is the story of Aura, a recent college graduate who returns home to New York to move back in with her mother, a successful photographer who takes photos of "tiny furniture" and her overachieving younger sister, Nadine.  Aura has just broken up with her boyfriend, and armed with a film degree, she's having a hard time and doesn't really know what she wants to do with her life.  She reunites with her childhood friend, Charlotte, and has some fun around town.  She gets a job as a hostess.  She embarks on flirtations with a couple different young guys.  She struggles for her mother's love and respect and attention.  She walks around her apartment without pants.

This all sounds boring but it's not.  Aura is a likable, believable character.  She is funny and witty and honest.  Even though Tiny Furniture is mumblecore-esque, it felt a little bit more fast-paced than most of the others I've seen, and I found the characters more likable and less self-pitying.  Aura is fun to watch, and I could identify with her, being that I at times fall into the "I don't know what I want to do with my life" camp as well.

The ending of the movie was classic mumblecore, in that the screen just kind of goes black suddenly, when I was still wanting a little bit more, but that's OK.  I still really liked it.  8/10.
Posted by abbalish at 1:15 PM