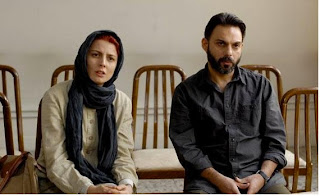 The Oscars are tonight!  My husband and I are attending an Oscars party at a local theater tonight where we'll have the chance to submit our predictions to win free movie tickets for a year, so yesterday we did a little bit of research on the various nominees.  While perusing the nominees, we came across the Iranian film A Separation, which has been nominated for best foreign film.  My husband already had this one on DVD and, not having seen any of the foreign film nominees, we decided to watch it last night.  1 out of 5 is better than 0 out of 5, right?

A Separation is kind of the story of Nader and Simin, a middle-class Iranian couple who are separating.  Simin (the wife) has obtained a visa and wants to leave Iran to raise the couple's 10-year-old daughter elsewhere, but Nader does not want to leave behind his elderly father, who is suffering from Alzheimer's.  I say "kind of" because the film is not so much a story of Nader and Simin's separation, but their separation is more of the jumping-off point from which two families' lives begin to spin out of control.  Simin leaves Nader to stay with her parents, and Nader hires a lower-class woman, Razieh, to care for his father during the day.  One day, Nader returns home - Razieh is nowhere to be found, and his father is unattended and tied to a bed.  When Razieh returns to the home later, having been on an undisclosed errand, tempers flare.

Honestly, I am not sure what to say other than I thought this was a really well-done film.  It was a compelling story, full of twists.  Actually, calling them "twists" makes them sound more dramatic when they actually were.  More like, small bits of information were revealed at crucial points, which keeps the audience guessing about what really happened and how.  I thought the story unfolded suspensefully and realistically.

I haven't seen any other of the foreign film nominees so by default, A Separation will get my vote tonight (even though it's favored anyway).  8.5 out of 10.
Posted by abbalish at 10:03 AM