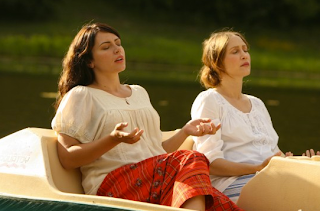 Well, friends and imaginary readers, we've come to the end of 2012 and thus ends my year-long project of movie reviews.  I bring you my final review for the year: Higher Ground, directed by and starring Vera Farmiga as Corinne Walker, a member of a fundamentalist Christian community who begins to question her own faith.  After becoming pregnant and marrying very young, Corinne and her husband embrace religion after a bus crash almost kills them and their infant daughter.  They enter the fold of a community that's not quite a cult, but is close.  Through the ensuing years, her faith begins to falter, and Corinne eventually must decide whether to stay a part of the community, or leave.  I thought Higher Ground was sort of a quiet little movie about one woman's struggle, but it was an interesting story with good actors.    7 out of 10.

It's been a fun year, albeit frustrating at times.  I'm not going to lie; I'm looking forward to a movie just being a movie, and not a writing assignment.  But I've enjoyed trying to think more critically about the films that I've watched.  Still to come - my best of 2012 list, to wrap up the year.  Happy 2013 :-)
Posted by abbalish at 4:48 PM