AKA: The Worst Camping Trip Ever 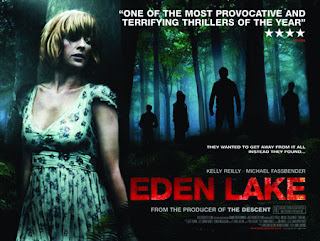 I feel like I'm going to have a hard time rating this movie, because I thought it was very well-done but I pretty much hated watching it.  My husband had recently seen this and said that he'd thought that I would like it.  About a third of the way into it last night, I said to him, "Why, exactly did you think I would like this one?!"

In Eden Lake, Steve (Michael Fassbender! who, while frequently topless, doesn't go full frontal in this one, sadly enough) takes his girlfriend Jenny to a secluded lake in the woods for what should be a romantic camping trip.   A band of young hooligans (probably 14 years old or so?) arrives, boombox in tow; Steve asks them to keep it down, and the weekend quickly goes downhill from there.  Steve's car goes missing the next day and when Steve and Jenny track it down, they not surprisingly find that that the gang of youngsters has it.  A scuffle ensues and Steve accidentally kills the kids' dog.  The hooligans are pissed and vow revenge, and Steve and Jenny must run for their lives.  If you thought things went downhill fast before, they really go downhill once Steve and Jenny are being mercilessly pursued through the dark and deserted woods.  This is what makes up the latter two thirds of the movie.  This one is not for the faint of heart.

The story unfolds in a very believable way, which is precisely why I found Eden Lake so scary to watch.  I'd imagine that many people in Steve and Jenny's position wouldn't think twice of asking some jerky 14-year olds to keep it down.  Hindsight is 20/20 and by the time Steve and Jenny realized exactly how maniacal these kids were, it was too late - they had already angered the beasts.  I've never been a camper, and now after seeing Eden Lake I feel justified in my non-campingness.  This is the one thing that I can take solace in.  Sure, not to say that I will never be pursued by a band of 14-year old hooligans, but at least if that happens I won't be at a secluded lake in the woods.

As I said earlier, I do think Eden Lake was well made, but it was a really rough watch.  It's hard to separate the two to come up with a rating, but I think I'll give it a 7 out of 10 - with the caveat that I never want to watch this movie again.
Posted by abbalish at 6:58 AM