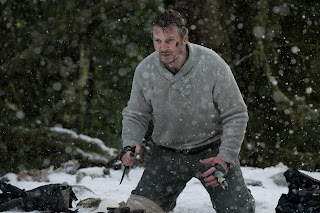 I didn't particularly want to see this movie.  I was mildly interested, mainly because I'd seen and liked Liam Neeson in other action movies, but man vs. wolves action flick?  Didn't think it was my cup of tea.  But alas, I found myself with an afternoon to kill while my husband was at work, and The Grey seemed like the least of all evils playing at the theater.  BUT HOLY CRAP I LOVED THIS MOVIE.

Liam Neeson stars as Ottway, a broken-down "wolf killer" - his job is to stand guard around oil crews, and shoot any wolves that get too close.  On a flight back from a job, the plane carrying Ottway and the scummy crew of oil workers crashes somewhere in the middle of nowhere, Alaska.  Most of the passengers die immediately, but Ottway and 6 others survive.  It is very, very cold outside.  And there are many, many wolves.  And the wolves are not happy about the intruders on their territory.  Ottway is the only one of the survivors with any knowledge of wolves and their habits.  He tries his damnedest to lead the motley crew to safety, but the ranks dwindle rapidly.  Ultimately, it comes down to the alpha male vs. the alpha wolf in a battle to the death.

There was lots of blood and gore but The Grey also had a tenderness to it that moved me to tears on several occasions.   It was an intense story that was well written and well acted against a starkly beautiful backdrop off the sub-freezing Alaskan wilderness.  In the past, I remember enjoying the Liam Neeson movies I've seen, but not thinking he was a particularly skilled actor.  In The Grey I thought he played the role of Ottway perfectly - soulfully, chillingly, and heartbreakingly.  I read that the role of Ottway was originally cast with Bradley Cooper and I feel like The Grey would have been a completely different movie if that had been the case.

I think what I loved most about The Grey was how brave it was, in that it rejects the idea of a savior and shies away from cliched, happy endings.  There is no God in this movie; every man must do for himself.  Ottway wants to believe in a God that will save him, but it is just man vs. wolf.  It's up to him to strap broken bottles to his hands and step into the fray.

I keep writing more and then deciding I don't know what I'm talking about, and deleting it.  I feel like I can't adequately express my feelings on this movie because I loved it so much!  Which means I should probably cut this off now, so I'll just say that I haven't stopped thinking about The Grey since I saw it.  Enthusiastic 9/10.
Posted by abbalish at 5:24 PM