John Dies at the End 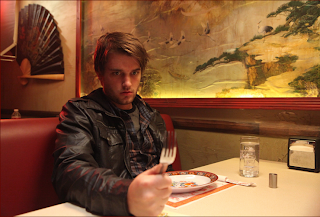 We caught a special showing John Dies at the End, the new movie from the director of Bubba Ho-Tep (which I watched a few months back); it will be officially released early next year.  It's a horror comedy, I guess?  The plot is hard to describe - so I'm just going to paste the same synopsis that I keep seeing online:

It's a drug that promises an out-of-body experience with each hit. On the street they call it Soy Sauce, and users drift across time and dimensions. But some who come back are no longer human. Suddenly a silent otherworldly invasion is underway, and mankind needs a hero. What it gets instead is John and David, a pair of college dropouts who can barely hold down jobs. Can these two stop the oncoming horror in time to save humanity? No. No, they can't.

John Dies is every bit as strange as it sounds, and quite honestly I'm *still* not even sure of a lot of the otherworldly details.  At first, it was striking me as sort of Ghostbusters meets Dude Where's My Car, but then it just kept getting more bizarre and my comparisons didn't really hold past the first 15 minutes.

I can see John Dies being a cult classic for fans of the genre, but it didn't really do it for me.  There were definitely some funny moments and some scary moments but overall I thought it was silly and rather confusing.  5.5 out of 10.
Posted by abbalish at 8:01 AM