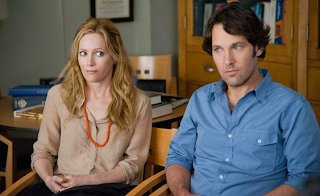 I'd been seeing previews for This Is 40 for ages, it seems, and I was really looking forward to it.  I am a big fan of *most* of Judd Apatow's work and I thought the characters of Debbie and Pete were funny in their debut in Knocked Up.  And I tend to like Paul Rudd in just about everything he does.  I had already seen that This Is 40 was getting pretty lukewarm reviews, but I went in with an open mind and a forgiving outlook - sort of expecting that it wouldn't be a "great" film but still expecting to enjoy it.  I mean, heck, I gave American Reunion a 7/10 earlier this year mainly because I had a soft spot for the class of 1999.

Unfortunately, the lukewarm reviews were right: This Is 40 just wasn't very good.  I think the biggest issue is that it's severely lacking in the plot area.  The basic plot is that Debbie and Pete are both turning 40 in what seems like the longest week ever known to mankind.  But while the actual plot was lacking, there were WAY too many unnecessary subplots - e.g. Debbie thinks one of her employees is stealing from her store; Debbie and Pete both face issues with their dads; one of their daughters has raging hormones; Pete has high cholesterol but refuses to stop eating cupcakes (side note - maybe that would be more believable on a less fit-looking man).  Supposedly the family is struggling financially, but it's difficult to feel much pity when they're driving around in a Lexus and BMW, living in a mansion that costs probably $2 million, and going on impromptu romantic getaways to Laguna Beach in the middle of the week. Which reminds me - for a couple that claims not to be having much sex, they sure seem to have a lot of it to me.

Another issue is the acting.  I don't think Leslie Mann is a good enough actress to pull off a leading role like this.  She strikes me as a bit "one note" - I think she's much better in smaller, memorable supporting roles (I remember feeling the same way about Andy Samberg when I watched him in Celeste and Jesse Forever a few months back).  I thought the Apatow girls were pretty limited in their acting abilities as well.  I mean, I get it, they're Judd Apatow's real life family, but they're just not that great of actresses.

I have seen a lot of mediocre movies that start off as enjoyable and then just lose steam as the movie progresses.  This Is 40 isn't one of them.  From pretty much the very beginning, it established itself as a mediocre movie.  And while there were some genuinely funny moments sprinkled throughout, it just wasn't very funny on the whole.  Maybe I've outgrown hemorrhoid and colonoscopy humor.  I'm actually surprised that This Is 40 is hovering around 50% on the "tomatometer" - I'd expect even lower.  I almost feel guilty writing such a bad review because I really do appreciate Judd Apatow's work and will almost certainly continue to watch it in the future.  But the bottom line is that this is a not very good film about not very likeable people.  Better luck next time, Judd.  4 out of 10.