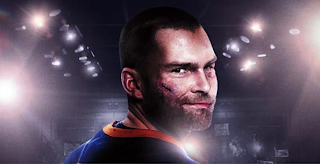 A hockey comedy starring Stifler?  Yeah, didn't think this would be my cup of tea.  But my husband suggested Goon to me when I was leaving on a trip and looking for airplane entertainment.  He predicted I'd give it an 8, and that I might even cry.

Seann William Scott plays Doug "The Thug" Glatt - a mild-mannered dude of slightly less-than-average intelligence, with ham-size fists that can crack skulls.  He works as a bouncer in Boston, until one night he attends a hockey game and lands on TV after punching out a player during the game (but for good reason!  The player used a homophobic slur!).  The footage impresses a local hockey coach, who invites Doug to come join the team, never minding the fact that Doug doesn't know how to skate.  He does well and ends up being recruited as an "enforcer" on the Halifax Highlanders - where fame and fights await him.

I was surprised at how much I enjoyed Goon, given my lack of interest in and knowledge of hockey.  It held my interest the whole way through.  I kind of loved the character of Doug and I thought Scott played him perfectly.  The character was extremely sensitive - despite his hockey successes he was still yearning for approval from his very traditional parents.  My heart broke for him when he presented his mother with the "game puck" (is that what it's called?) and she left it on the table :( :( :( I also found him utterly charming in his courting of a young woman, played by Alison Pill.

I will say, however, that Goon is pretty gory.  I found myself trying to shield my screen from other people on the plane, lest they see me watching a movie with copious amounts of blood falling in slow-motion onto the ice.  But hey, I guess that's what happens in hockey.

Anyway, the hubs was right - I'm giving Goon an 8 out of 10.  I didn't actually cry but I'll admit that I came pretty darn close!
Posted by abbalish at 11:59 AM