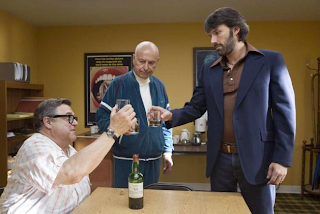 Argo is the true story of the risky operation to save six Americans during the Iran hostage crisis in 1979.  As the American embassy was being stormed by militant Iranians, the six American embassy workers managed to slip out unseen and took refuge in the home of the Canadian ambassador.  Ben Affleck stars as Tony Mendez, the CIA specialist who hatches the crazy plan to get the Americans home from Iran - pretend to be a movie crew scouting locations to film in Tehran.  He enlists the help of a makeup artist (John Goodman) and a producer (Alan Arkin) to find a real script (a cheesy science-fiction epic called Argo), draw up storyboards, and basically make the whole thing appear legit.

I thought Argo was excellent.  It was serious subject matter but the parts involving the prep work of Argo were very funny.  Starting from when Mendez went to Iran to put his plan into action (probably a little bit before the halfway point of the film), I was completely enrapt.  The tone and feel were unbelievably tense.  And the ending had me literally on the edge of my seat - (hint: there IS a happy ending!).  Stick around for the credits, there's some really good stuff!  8.5 out of 10.