Shock Around the Clock! 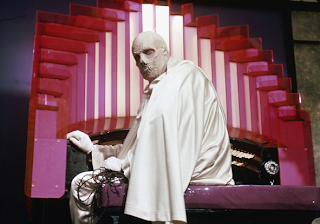 Last weekend PJ and I attended a 24-hour horror movie marathon at a local movie theater.  Well, for braver souls it was a 24-hour marathon; for us it was more like 11 hours.  After 11 hours packed in the middle of a row without much of a view of the screen, and after consuming a sub sandwich, Junior Mints, popcorn, soft pretzel with cheese, and Twizzlers....well, let's just say it was time to go home.  As I said to PJ when we were leaving, I couldn't even fathom sitting there for 14 more hours.  Here are VERY brief recaps and ratings of the films we saw.

The Abominable Dr. Phibes - A doctor returns from the dead to seek revenge on the nine doctors he thought were responsible for killing his wife.  Creepy and pretty gross.  6 out of 10.

White Zombie - A young man wants a beautiful young bride for himself....but instead, she just turns into an emotionless zombie.  I actually feel like I missed big chunks of this movie because the sound quality was so poor, but from what I saw I'll give it a 6 out of 10.

Something Wicked This Way Comes - A demonic circus comes to town, and its diabolical proprietor wants two young boys to join him.  Kinda boring, I thought.  5 out of 10.

Phantom of the Paradise - After record producer Swan steals his music and his woman, a disfigured composer returns to seek vengeance on Swan's Paradise music club and on Swan himself.  Probably my favorite of the day - the story was compelling and the film was pretty funny.  The music was catchy, too!  7.5 out of 10.

Kill List - I actually slept through a big chunk of this because I couldn't really see and was sick of moving my head around based on how the big guy in front of me was sitting.  But from what I did see, a professional hitman leaves his tumultuous family life to take care of what should be an easy hit list, but it's not so easy.  Strange film and I wish I'd stayed awake for it, because the ending part didn't make much sense to me!  I will refrain from rating, since I didn't see the whole thing.
Posted by abbalish at 6:26 AM