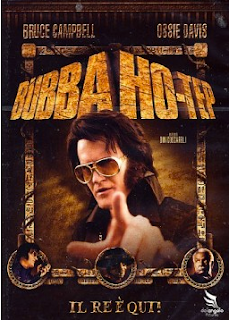 To preface this review, let me explain that the way my husband and I typically choose movies to watch at home involves him making a preliminary selection of 3-5 movies, and I pick which one to watch.  Bubba Ho-Tep had been in his preliminary selections pretty much nonstop for the last six months.  I never chose it - it just sounded stupid to me.  Finally, last Thursday night, I realized it was never going to go away until we watched it, so in my words, "we should just get it over with."  So Bubba Ho-Tep it was.

In a nutshell, Bubba Ho-Tep is about two brave old men (played by Bruce Campbell and Ossie Davis), who may or may not be Elvis and JFK,who take down the ancient Egyptian mummy who has been attacking the souls of the poor folks at their old age home.  And you know what?  It was pretty stupid, but it was also entertaining and kinda touching.  6.5 out of 10.