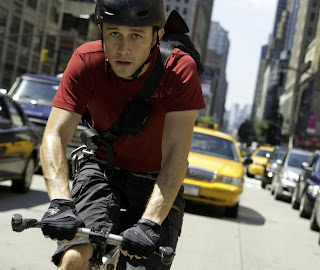 Premium Rush is sort of a bike messenger action movie, which didn't really appeal to me.  But it was getting good reviews, so the hubs and I gave it a shot last night.  Joseph Gordon-Levitt stars in as Wilee, a bike messenger who is called upon to deliver a highly mysterious and valuable document, and finds himself pursued across New York City by a crooked police detective who wants the item for itself.  It was fun and fast-paced.  Plus, I could watch Joseph Gordon-Levitt ride a bike all day long.  I just think he is so adorable!  The movie did feel a bit targeted to teenagers - which is probably to be expected, since it is rated PG-13.

Side note - Gordon-Levitt's character is a law school graduate who doesn't want the buttoned-up, 9-5 lifestyle.  He prefers the adrenaline rush of riding a bike with no brakes instead.  As a fellow law school graduate who had a quarter-life crisis during law school where I decided I wanted to work with my hands instead of my brain, I totally get it.  Not that I've ever created anything with my hands in my life, but I'm just saying.....I get it.

And another side note - if you happen to be in the Columbus area, check out the new dine-in theaters at Easton.  We saw the movie in one of these theaters last night and I really liked it.  The seats are groups of two, and you actually reserve your seats in advance.  You can order food, drinks and snacks right from your seat.  The food was pretty good, too.  Prices are a *little* high for what you get, but it's a fun way to do dinner and see a movie all at the same time.  We'd definitely go back.

Back to the subject - Premium Rush gets a 7.5 from me.  It's worth seeing for the adorableness that is Joseph Gordon-Levitt alone.
Posted by abbalish at 6:18 AM