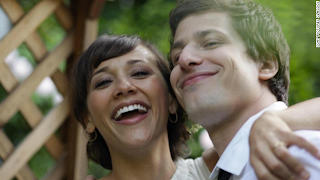 Celeste and Jesse Forever is one of those movies that I thought I was going to love.  It had all the right ingredients - quirky romantic comedy with a fun cast (Rashida Jones, Andy Samberg, Ari Graynor, Chris Messina) but I just didn't love it.

Jones and Samberg star as Celeste and Jesse, a 30-ish couple who are divorcing but still act as if they're married.  Celeste's career is taking off and Jesse's is not, but they still spend all of their time together and frequently lapse into their private jokes and schticks.  Jesse sort of wants to get back together but Celeste doesn't, and then maybe Celeste starts to change her mind, but it's too late - Jesse has moved on and can't really look back.

The plot and the cast certainly had potential, but it just kinda fell flat for me.  I didn't hate it by any means and it did have some funny moments, but I found the character of Celeste to be sort of pretentious and unlikeable, even though I think she was supposed to be quirky.  Also, I just don't think Andy Samberg is great as leading actor; he's much better in SNL and small roles.  Andplusalso, there was a bizarre subplot involving Celeste and the young pop star (played by Emma Roberts) that her company is promoting, which in my opinion felt out of place and completely unbelievable.

All in all, I'd save your money and wait until this one comes out on HBO.  I'm actually kind of surprised that it's been getting mostly good reviews from critics.  From me, it gets a 5.5 out of 10.
Posted by abbalish at 8:39 AM