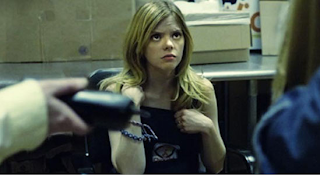 Wow, what a movie.  All I knew going into this movie is that it had something to do with someone calling a fast food restaurant with some strange demands and was based on a true story.  And I knew that the reviews, while mostly positive, had also been somewhat polarizing.  This review is probably going to contain some spoilers, so if you want to go into seeing Compliance cold, then read no further.

Sandra is a harried, middle-aged manager of a fast food restaurant.  She is already having a rough day - the restaurant is out of pickles, she's expecting a visit from quality control, and someone left the freezer door open the night before, resulting in $1500 of spoiled bacon.  The Friday shift begins normally enough, but just as the restaurant begins getting slammed, Sandra receives a phone call from "Officer Daniels."  Officer Daniels claims that he has someone with him claiming that the young blonde girl at the front register stole money from her purse, and that the cashier is also part of a much larger investigation.  Sandra pulls Becky (the only cashier who fits the description) into the back office.  Over the phone, Officer Daniels gives Sandra orders to search Becky's belongings for the stolen money.  She finds nothing.  Over the rest of the evening, Officer Daniels walks Sandra, Becky, and a rotating cast of Becky's coworkers through more investigation - each step more invasive than the last.  Eventually, the investigation goes too far and it becomes clear that they've been duped.

The progression of Sandra's character was fascinating for me to watch.  When the movie begins, she seems to be struggling for control and respect.  When she first brings Becky into the investigation, you can tell she feels terrible about what she's doing.  But Officer Daniels knows what buttons to push - he is quick to praise Sandra's willingness to help and to show sympathy for her plight as an overworked restaurant manager.  As Compliance progresses, you can see Sandra becoming stronger and more powerful.  She begins to take it as a given that Becky actually stole something, and becomes much less sympathetic to young Becky.

The other interesting part for me was to try to put myself in the character of Sandra.  It is easy to sit in the audience and say, "OMG, he is so obviously tricking her, I would never fall for that."  But most people have an innate trust for figures of authority, and you can sort of see why she goes along with it.  So maybe I would react the same way if it were me, although I'd really hope not.

I do see why the reviews have been polarizing, and I also understand why some people have walked out of the screenings.  It is rough to watch.  At one point I turned to my husband and said, "How much longer is this going to go on?"  But the ability to polarize its viewers just means that Compliance was an effective movie.  When it ended, I felt like I had been put through the wringer - I sort of felt like I had been part of the interrogation.  Personally, I thought it was very powerful and thought-provoking.  I actually woke up this morning still thinking about it.  Which reminds me, Compliance WAS based on true events - I need to Google what actually happened.  Okay, enough rambling.  9 out of 10.
Posted by abbalish at 6:04 AM