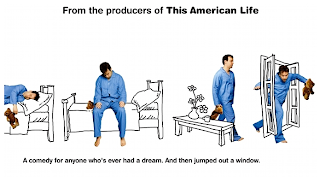 Sleepwalk With Me is the autobiographical story of comedian Mike Birbiglia as he gets off to a start in the comedy business.  When the film opens, he's working as a bartender in a comedy club and has just moved in with his longtime girlfriend.  As the film progresses, he gets hooked up with a promoter and his career begins to take off (though not without a rough - yet hilarious - start), at the same time that his relationship begins to fail.  While all of this is going on, he starts experiencing scary bouts of sleepwalking.  Yet, he choose to ignore both the failing relationship and the sleepwalking much longer than he should.

In a nutshell, I loved it.  I was not familiar with Mike Birbiglia's work (although I'd seem in several smaller roles without realizing it) but now I'd like to read his book after seeing the movie.  The cast was excellent and just about anyone who's anyone in the comedy business today has a cameo (even the late great Mitch Hedberg - holla!).  The story was fascinating, funny and touching all at the same time.  Go see it!  This is definitely one of the year's best, in my opinion.  9 out of 10.
Posted by abbalish at 8:29 AM