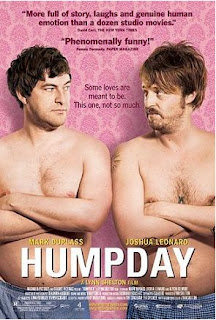 Our criteria for choosing a movie was last night was as follows: not too long, relatively recent, and something neither of us had seen.  2009's Humpday fit the bill quite nicely.  Ben and Andrew are college friends who have gone in different directions in their lives.  Ben is married and on the baby train, and Andrew has been traveling the world making art.  Then one night, Andrew shows up at Ben's door in the middle of the night.  They reunite and get wasted with some new friends and in the process, somehow decide that they should star in a gay porno together.  For the artistic merit, of course.

It sounds really silly, but I kind of loved it.  It was funny all the way through, and all of the main characters (Ben, Andrew, and Ben's wife, Anna) were likeable, mostly reasonable human beings, which I find kind of rare in movies.  Anna isn't thrilled about the idea but she gives Ben her blessing in a way that seems almost logical.  You can't really tell if they're going to go through with their plan - and personally, I kind of wanted them to, but kind of didn't.  As I commented to my husband when it was over, I found it somewhat amazing that we had just watched a movie that was about two straight guys wanting to make a gay porno together that managed to be funny and downright heartwarming at the same time.