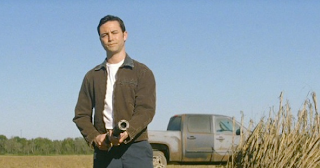 Looper is a thriller starring Joseph Gordon-Levitt as a "looper" - an assassin who is hired to kill people from the future, who get sent back in time by the mob to meet their demise.  One day, his target is a future version of himself (Bruce Willis).  I don't think I'm giving away too much by telling you that, but that's all I'll say.

It was very good, but MAN was it complicated.  I felt like my brain was in overdrive the entire time, and I needed several hours afterwards to continue to process it.  Even now, the next day, I will think that I grasp everything and then I'll get confused again.  My husband claims some of the time travel details were flawed, but I think the flaws are more with me.  JGL was great, as per usual, even though his prosthetic Bruce Willis-esque eyebrows were a creepy.