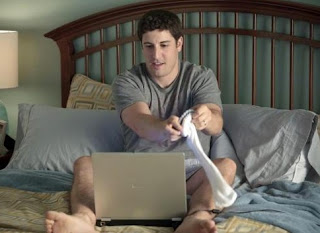 I think I will always have a soft spot for the American Pie brand.  As a fellow member of the class of '99, these dudes are perpetually at the same age as I am, so it's fun to watch them through the years.

American Reunion is exactly what the title sounds like, and exactly what you'd expect.   Jim has a young son and is experiencing a dry spell in his marriage to band geek Michelle.  Kevin's somewhat emasculated these days, cooking elaborate dinners and watching Real Housewives with his wife.  Oz is a TV sports commentator.  Finch is basically the most interesting man in the world.  And Stifler is Stifler.  The gang all comes back home to Great Falls for their 13-year high school reunion.  What ensues during the reunion weekend is a whole lot of hijinks involving lots of alcohol, barely legal next door neighbors, defecation in beer coolers, reacquaintances with old loves, wild parties, and full frontal nudity (from Jason Biggs, if you hadn't heard).  While many of the hijinks were stupid, there were some good laughs in there too.  I could happily watch drunk Eugene Levy for hours.

I feel like I see a lot of movies that start out really good, and then go downhill somewhere around the 1/2 to 2/3 mark.  Well, American Reunion sort of did the opposite.  I found much of the first 2/3 pretty stupid, but then something happened toward the end that redeemed it in my eyes.  The tone changed, and it stopped being a raunchy shock-fest, and it actually became sweet.  Dare I say I might have even gotten teary-eyed at some of the scenes from the actual reunion.  Don't judge.

7 out of 10.  For the record, until the tone changed I was thinking along the lines of a 4 out of 10.  I guess I'm a big old sap.  A big old sap who will probably continue to see these movies as long as they keep making them, even though they should probably quit while they're ahead.
Posted by abbalish at 6:47 PM