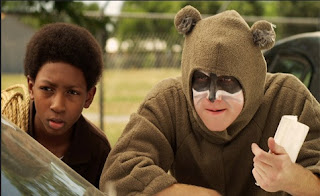 I had an inkling that General Education was going to be pretty bad, mainly because the picture above is what was used in the film festival's promotional materials.  But I like Janeane Garofalo and there wasn't anything else we were dying to see during the timeslot of the screening, so we figured what the heck and got tickets.

The plot centers on a high school senior, Levi, who fails science class and has to go to summer school so he can graduate, but get this!  His parents don't know that he's in summer school!  And he falls in love with a pretty girl in class, and there's a weird subplot involving tennis, and another weird subplot involving Levi's mom feeling unappreciated and getting drunk and falling asleep in the bathtub.

And OMG, this was the worst movie I have ever seen.  I think it was supposed to be funny?  But it just wasn't, at all.  I didn't laugh at all, except for a few moments where the full extent hit me of just how awful this was.  The writing was terrible, the acting was terrible, the editing was terrible.  And it just didn't make sense!  General Education was written, directed and produced by a bunch of 20-something dudes and it shows.  It came off like the writers had never met a black person, a gay person, or a woman before.