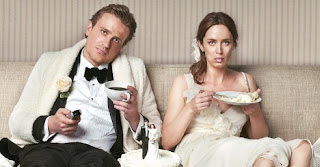 The Five-Year Engagement is the story of Tom and Violet - a young couple engaged to be married, but life just keeps getting in the way.  Violet gets accepted for a psychology post-doc at the University of Michigan and Tom gamely agrees to leave his chef job and move from San Francisco with her for her two-year stint.  Except the two-year stint gets extended and their relationship falters....and the wedding plans just keep getting pushed back.  But worry not, I don't think I'm giving too much away to say that there's a happy ending.

I've got mixed feelings about this one.  I wanted to love it, and I did really enjoy much of it.  Jason Segel and Emily Blunt were both great and they felt believable in their parts.  The supporting actors were very funny as well - Brian Posehn and Chris Parnell in particular, who played Tom's motley crew of buddies in Michigan.  The ending was genuinely adorable, and I may or may not have gotten just a *tad* teary-eyed.

However, the movie was just too long, so much so that much of the latter half dragged.  I think a lot of it could have been cut without negatively impacting the movie, and probably even improving it - for example, an extended section where Tom goes a little crazy and begins hunting, stops shaving, brews his own honey, and wears a bunny suit around the house.  That definitely could have been cut.  Also, there's a secondary plot involving Violet's sister and Tom's best friend which didn't really add much in my opinion.

All in all, The Five-Year Engagement was not a bad way to spend two hours - but it would have been a better way to spend a modified hour and a half.  6.5 out of 10.
Posted by abbalish at 7:41 AM