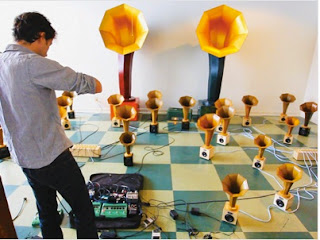 This documentary took a look at musician Andrew Bird's "fever year" - a year of intense touring which Bird called his fever year because performing live seemed to put him in a perpetual feverish state.  At only 80 minutes long, I'd wager that a full 45 of those minutes were taken up by extended live performances.  There were some interviews thrown in, but not very many, and they were pretty limited in scope - most talked about what a serious musician Bird is.

In the way that Beauty Is Embarrassing introduced me to a new subject and made me care about it, Andrew Bird: Fever Year did the opposite.  I was not familiar with Bird's music prior to seeing this film, and seeing the movie did nothing to make me care one way or the other.  The music was appealing, but pretty music is not enough to make an effective documentary.  I found myself somewhat put off by Bird himself - he came off as very one-dimensional and took himself very seriously.  More so, a lot of musicians have intense touring schedules.  A year jam-packed with live performances doesn't seem unique enough to merit a documentary.

That said, I can see this movie being really enjoyable if you're already a fan of Bird's music.  For me, though, it was pretty boring to watch, and ineffective in that nothing pulled me in and made me care about the subject.  4.5 out of 10.
Posted by abbalish at 11:50 AM